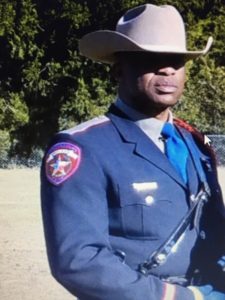 54-year-old Robert Jackson is what many would call a ‘manly man’. He’s 6’2”, weighs 215 pounds and lifts weights regularly. He’s been a DPS State Trooper for 19 years and is a member of the Honor Guard.

But in the fall of 2018, while Robert was helping his son move furniture, he moved just slightly the wrong way and a shooting pain went down his left side that brought him to his knees.

He went to the ER because the pain was excruciating and was later referred to Dr. Ai Mukai, a physical medicine and rehabilitation specialist.

She suggested a nonsurgical treatment first that involved an epidural steroid injection. Epidural shots are less invasive treatments that use strong anti-inflammatory medicine that’s injected directly into the space outside of the sac of fluid around your spinal cord.

When that didn’t alleviate Robert’s pain, he saw Dr. Atilla Onan, a fellowship-trained spine surgeon who ordered an MRI which revealed a severe pinched nerve.

Specifically, Dr. Onan suggested the Mobi-C artificial disc, which is a flexible polyethylene device designed to easily self-adjust to natural spinal movements. This would help Robert with a greater ranger of motion than other manufactured disc replacements.

Dr. Onan says the benefits associated with Mobi-C include:

Robert says he felt immediate relief after the surgery. He was told it would be a six week recovery, but after just two weeks, he was able to slowly walk on a treadmill and even lift very light weights.

He’s now back to doing the things he loves most and says he is living pain-free.

We’re so happy for you, Robert!

Patient Story: Thomas Goebel Back on the Court Thanks to Two Texas Orthopedics Physicians