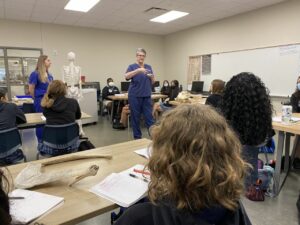 Orthopedic surgeons Dr. Barbara Bergin and Dr. Kelly Cline are taking their expertise and leadership to the students of The Ann Richards School for Young Women Leaders, teaching a hands-on sports medicine class.

The students in Kristine White’s sports medicine classes at the Ann Richards School for Young Women Leaders are investigating different animal bones and comparing them with the human ones they’ve been studying.

For White, who is also the athletic trainer at the school, bringing in female doctors to her classes has a couple of purposes: She wants her students to be comfortable communicating with doctors, to be able to speak the lingo and tell them exactly what hurts and what happened, and she wants them to see female professionals in the medical field.

For the doctors, they want more women to consider going into orthopedic surgery. About 6% of all practicing orthopedic surgeons are female and about 15% of orthopedic residents are female, the lowest percentage of females for the top 10 residency specialties, according to a study published in the Journal of the American Medical Association.

Bergin, a co-founder of Texas Orthopedics, remembers being the only woman when she began her training for orthopedic surgery in 1981.

“If you don’t have women mentors, you don’t see yourself doing that,” she said.

Bergin had intended to be a psychiatrist, but during a rotation it was discovered that she could sew, which translated to being good at sutures.

“I started thinking differently,” she said.

Even though she was told that there were no women in orthopedics, she thought, “Well watch me,” she said.

She learned how to use a drill and saw, something her male colleagues at the time had more experience with growing up.

At first Bergin would go to conferences and be the only woman in the room.

By the time Cline started her training three decades later, “I was lucky enough to have some female mentors,” she said.

One in particular took her under her wing, she said.

“She gave me a huge gift. She invested her time in me when she didn’t have to. She believed in me,” Cline said.

Cline and Bergin also teach at Dell Medical School at the University of Texas, but “if we can reach out to them when they are younger and they don’t know this is an option, then we are planting the seed early,” Cline said.

For the past two years, the doctors have taught the class at Ann Richards about once a month. During the height of COVID-19, they taught on Zoom, but in April they were back in the classroom doing in-person teaching.

They’ve taught the girls about X-rays and Madame Marie Curie, the late scientist and Nobel Prize winner who was responsible for pioneering research on radiation.

“We want to encourage the girls to think about inventing things,” Bergin said.

They have plans for more hands-on lessons next year when they hope COVID-19 will no longer be a factor — dissecting chicken wings to see the tendons, practicing putting on casts, and using drills and saws to connect fake bones.

“Growing it into more interactive and hands-on will bring some of it to life for the girls,” Cline said.

“I’ll never forget the first screw I put in,” Cline said. With the girls at Ann Richards, she wants to share “that hands-on feeling of doing something with your hands and changing someone’s life.”

The girls have taught the doctors something, too. Bergin is retiring from her practice in June and is considering being a substitute teacher.

The girls also remind them that what they do is special. They say, “‘Oh, my gosh,’ when we show them an X-ray,” Cline said. “Sometimes you forget that magic that’s there. … To hear them say, ‘Whoa, that’s cool,’ it rejuvenates me in a way. It is really cool what we get to do every day.”

“For sure, they are thinking they can go to medical school and can be doctors and surgeons,” Bergin said.

The class already has had an impact on some of the students taking it. Senior SaNaya White is heading to the University of Tulsa for a five-year program in sports medicine. She said she was planning to be a veterinarian until she took this class and loved the work.

When she sees the doctors and when she sees her teacher on the field tending to student-athletes, “it gives me confidence,” SaNaya said. “It allows me to understand that I am capable of doing this, to see someone that looks like me as a woman and promotes women in a male-dominated field.”

Part of the class is hands-on training on the sidelines with White. This year, SaNaya helped clean and wrap the elbow of a middle school football player.

White teaches her students all kinds of medical information as well as practical tips such as how to deal with insurance and be a partner in their health.

“There are challenges to overcome,” White said. “It’s not always smooth sailing. It’s been a little harder to convince an athlete or coaches that I know what I’m doing because I am female.”

White, who previously taught in the Bastrop school district, now has seven former students who have become athletic trainers. She also has a student who has become a chiropractor.

“I’m super puffed up with pride,” she said.

Next year, she plans to add a primary care physician and that chiropractor to the roster of female medical professionals talking to her classes.

To schedule an appointment with one of our specialists, book online or call (512) 439-1001. Keep up with Texas Orthopedics news by following us on Facebook and Instagram.

Patient Story: Thomas Goebel Back on the Court Thanks to Two Texas Orthopedics Physicians