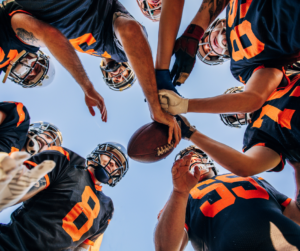 Throughout the fall sports season, you can find many of our orthopedic surgeons on the sidelines at local sporting events. Texas Orthopedics is proud to support the athletes, coaches, and athletic trainers in our community and share one common goal – injury prevention.

In a recent interview with Nicole Villalpando with the Austin American Statesman, sports medicine specialist J.P. Rodriguez, M.D., and pediatric neurologist Kate Labiner, M.D., shared their expertise on how athletes can best prepare their bodies for fall sports to avoid injury. You can read the entire article below or find it on the Austin American Statesman website here.

On playing fields all across Central Texas, kids are practicing football formations, learning this year’s band halftime show and picking up the pace as they get in shape for cross-country.

The start of the school year for many students means a return to sports and other physical activities after a summer off.

Here’s how to get ready and things to watch out for throughout the school year:

“Concussions don’t just happen in head-to-head collisions as seen in football,” said Dr. Kate Labiner, a pediatric neurologist with Pediatrix Child Neurology Consultants of Austin. “They can happen from any blow the head. My dog concussed me one day,” she said.

Dr. Labiner recommends that kids who are active in physical activities get a baseline concussion screening. Most school districts and some private schools have access to these screenings, which involve a 20-minute computer program. Parents or students can request one or have one done at a neurologist’s office.

“The baseline screening is important to be able to compare how a child’s brain worked before the concussion and afterward,” Dr. Labiner said. “If we don’t have baseline testing, we are comparing them to the age norm. That doesn’t account for kids with attention-deficit/hyperactivity disorder or dyslexia.”

Concussions might be felt immediately, but sometimes the symptoms are more obvious a day or two later. Look for sleepiness or difficulty falling asleep, brain fog, a headache that is similar to a migraine in intensity, light or sound sensitivity, dizziness or nausea.

The Federal Centers for Disease Control and Prevention has a return-to-play protocol for schools and students to follow. It calls for a slow progression back to activity. For instance, you start with light walking and if you are symptom-free for 24 hours, then you go to the next step like jogging. You work your way up until you can return to practice and then competition.

“You want to wait until you go through all the steps, Dr. Labiner said, because a second concussion can make the symptoms worse than the first one and can take longer to recover from. The brain is the one organ I cannot replace.”

If you do have a concussion, you can help your brain by following the return-to-play protocol and by taking magnesium and omega 3 vitamins to help your brain. Most of the time, you don’t need to go to the emergency room unless you have vomiting that won’t stop, you have been unconscious for more than five minutes or are confused for more than 15 minutes.

Parents should ask kids questions that are not yes-or-no. Things like “What is the date today?” “Where are you?” “What is your coach’s name?” can help determine confusion.

“All athletes, even kids, need to be incremental about getting back into shape”, said, Dr. J.P. Rodriguez of Texas Orthopedics. “Focus on building muscle strength, flexibility and cardiovascular endurance in the beginning. Usually, a lot of early problems are too much, too fast,” he said. “At all levels, the preseason is one of the highest times for injuries, whether it’s the NFL or even middle school sports.”

Shoulders, ankles, dislocating the knee or tearing the anterior cruciate ligament in the knee typically are some of the preseason or early season injuries.

According to Dr. Rodriquez, “A lot of that is preventable if they come into the season in really good shape. Body maintenance year-round is important for athletes. You should never have gotten out of shape in the first place. If you are counting on getting in shape for football, yes, it works most of the time, but you’re putting yourself at risk for injuries.”

Dr. Rodriguez says athletes need to work on building symmetry in their bodies to help prevent these kinds of injuries. They can have a trainer or a physical therapist evaluate them and give them exercises to work on building on both strength and range of motion on each side of the body.

Later in the season, injuries are not so much from not being conditioned well. Instead it’s overuse injuries.

“Athletes should warm up by doing dynamic stretches, such as high kicks. They should cool down with more static stretches, such as pulling your foot behind you to stretch out the hamstring muscle,” Dr. Rodriguez said. “It’s not just about the football players. People taking part in dance, band, color guard and other physical activities all need to be in good shape to make it through the season.”

If you have an ache or a pain that you experience while practicing or during a game, talk to a trainer to get specific exercises to work on that area as well as to be evaluated to see if you need to take a break or practice differently to avoid a more permanent injury.

Prepare for the heat

You shouldn’t go from being inside with the air conditioning playing video games all summer, to hours of practice outside in triple-digit temperatures. School programs should be easing kids into outside time to get bodies used to the temperature. Each day, do a little bit more outside, until you can handle being outside for all of practice. Take frequent shade breaks.

“Hydration isn’t something that you try to solve during the game or at practice,” Dr. Rodriguez said.  “Don’t try to fix those problems on the fly. Come in hydrated with all the electrolytes ready to go.”

If you have questions about our orthopedic, spine or rheumatology services, or would like to schedule an appointment with one of our specialists, book online or call (512) 439-1001.

4 Ways to Ease Back into Fall Sports

Dr. Logan on KVUE: Stay Safe While Getting Fit in the New Year

Dr. McDonald on Real Simple: How to Recover After a Workout