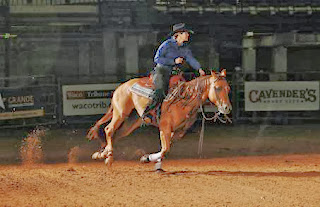 This is the first time Dr. Bergin has advanced to this level.  She qualified three times in the past, but her horse, Señor, went ‘lame’ every year. (For those not familiar with the term ‘lame’ it means there is either an injury or medical condition that causes a horse to be unsound).  Dr. Bergin retired Señor last year. T

his was her first year competing with Sampson. They start their 2014 season at the end of January.