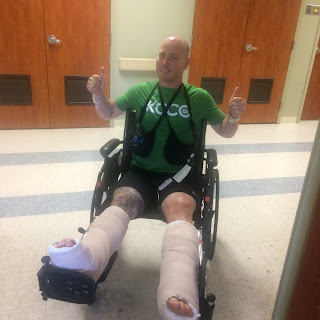 They soar high into the sky. They catch air. Unfortunately, they sometimes make crash landings too. Such is the life of an extreme athlete.
Chad Kagy, a BMX Big Air competitor, was a participant at X Games Austin 2015 when he suffered several traumatic injuries from a fall during a miscalculated trick. He was in the air on his bike when he crashed 30 feet down to the ground, eventually landing directly on his feet. The powerful force of the impact caused breaks in both heals, a torn right ACL, and a fractured L-2 (of the spine).
Lucky for Kagy, Texas Orthopedics’ Dr. David Laverty was the on-site orthopedic surgeon that day and the first responder to reach him after the fall and assess his injuries.
Once Kagy was rushed to the hospital and stabilized, Dr. Laverty expertly devised a surgical plan that would not only best treat his current injuries, but would also allow for his body to heal accordingly so that he could continue to compete again in the future. Having the foresight to accurately predict how a patient’s body will function following an injury is a challenge, but when treating a professional athlete, it is a necessity.
“I have had 20 orthopedic operations due to sports injuries throughout my professional career and have had quite a few different surgeons work on me,” said Kagy. “I am confident in Dr. Laverty’s skill set and ability to fix the body parts I damage. That being said, I have never encountered a surgeon with the ability to put the patient first above all else while thinking about their future after the injury.”
Chad Kagy is a four-time X Games gold medalist and tied for third on the X Games BMX all-time medal count (ESPN). Kagy is also an active member of Bikes Over Baghdad, a team of professional action athletes who travel to the Middle East to support and entertain our U.S. troops.
Dr. Laverty is one of our four highly skilled and trained physicians specializing in orthopedic trauma surgery and reconstruction. He has covered the X Games since it first came to Austin in 2014.
Keep up with Texas Orthopedics news by following us on Facebook and Twitter (@TexasOrthopedic).