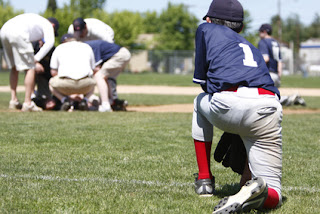 Spring has sprung, and baseball season is about here. If you have a young slugger playing ball, new research suggests that organized preseason arm injury prevention programs could lead to fewer injuries and decreased loss of playing time.
The American Orthopaedic Society for Sports Medicine (AOSSM) conducted a study on well-monitored preseason training programs for kids. The goal of the study was to determine if repeated arm flexibility and strength conditioning in the off-season could ultimately diminish the risk of injuries during the regular season. The study paid particular attention to pitchers who often suffer the most due to the repetitive nature of throwing the ball.
Specifics include:
Pitchers involved in this preventing program experienced reduced internal rotation (IR) and horizontal adduction (HA) deficits as well as other common overuse injuries affecting the arm, elbow, and shoulder.
Those who had past injuries and completed the preseason training were four times less likely to suffer a new injury that those who did not. The AOSSM hopes that this information will encourage parents, coaches, schools, and other baseball organizations to adopt such programs and help kids avoid injury.
(Courtesy of The American Orthopaedic Society for Sports Medicine)
Keep up with Texas Orthopedics news by following us on Facebookand Twitter (@TexasOrthopedic).