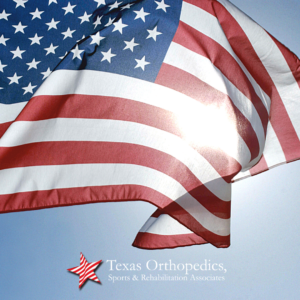 When 56-year-old Army Combat veteran Jeffrey Fox fell 18 feet off an extension ladder while working alone as a home builder, he called 911 and was taken by ambulance to the nearest hospital.

Once at the hospital, Jeffrey immediately requested a physician that was also a veteran to repair his shattered hip socket. “There is an unexplainable connection between veterans. It’s priceless,” explains Jeffrey. “I knew I would be treated like family.”

That’s when Jeffrey met former United States Air Force Major and orthopedic trauma surgeon, Dr. Vilas Saldanha. “There is no higher calling than taking care of your fellow brother,” explains Dr. Saldanha. “I was honored to care of Jeffrey and learn more about his time serving our country.

After assessing Jeffrey’s condition, Dr. Saldanha recommended Jeffrey not undergo total hip replacement surgery, opting instead for a less-invasive technique that required a cat scan of the hip to create a 3D model for pre-operative planning. Two days after the injury, Dr. Saldanha performed a procedure known as ORIF, or open reduction internal fixation, which utilizes pins and screws to hold the bones in place after setting the hip bone back into normal position. According to Dr. Saldanha, ORIF allows for less blood loss, improved hip mechanics and less risk of nerve injury.

Following surgery, Dr. Saldanha arranged for a veteran physician to oversee Jeffrey’s care during his short, two-week inpatient rehabilitation stay. “Dr. Saldanha was very concerned about my wellbeing and making sure I got better,” says Jeffrey. Almost three months after surgery, Jeffrey was fully recovered. “Dr. Saldanha is the reason I am able to still work,” said Jeffrey.  “He saved my life as far as I’m concerned.”

Jeffrey and Dr. Saldanha had to opportunity to share their story on Spectrum News. Watch their interview here.

Jeffrey served in the U.S. Army 2nd Infantry Division as part of the 2nd Stryker Brigade Combat Team in Korea from 1986-1987 and the 82nd Airborne Division 2nd Brigade Combat Team at Fort Bragg, NC from 1988-1990. Jeffrey was honorably discharged after having achieved the rank of E-5 Sergeant in 1990.

Dr. Saldanha’s service to the military includes a deployment in Afghanistan for Operation Enduring Freedom, where he founded the first orthopedic humanitarian clinic treating women and children displaced by the war.  Following his time in Afghanistan, Dr. Saldanha trained active Duty Airmen in war trauma techniques and assisted in the development of the Sustained Medical Airman Readiness Training program at the 99th Surgical Operations Squadron in Nellis Air Force Base, Nevada.

Dr. Saldanha is dual fellowship trained in Adult Joint Reconstruction and Orthopedic Trauma with specialization in hip replacement, knee replacement, and fracture care. He is currently seeing patients at our Northwest Austin and Round Rock locations.