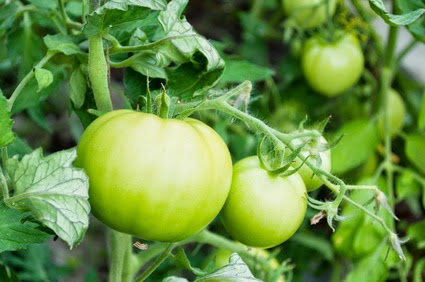 Many people that suffer from orthopedic injuries are also at risk for muscle atrophy, a serious condition where the muscles are “wasting”. Striking over 50 million Americans annually, muscle atrophy impairs physical activity, predisposes people to falls and fractures, and often forces people into nursing homes or rehabilitation facilities. Exercise is helpful, but for people that are ill or injured, there currently isn’t an effective way to prevent or treat it.
A team of scientists from the University of Iowa published a new study in the Journal of Biological Chemistry that links tomatidine, a compound from green tomatoes, to bigger, stronger muscles, in addition to preventing and treating muscle atrophy.
To begin their research, the team searched for a small molecule compound that might be used to treat muscle atrophy. They focused on tomatidine because it generates changes in gene expression that are essentially opposite to the changes that occur in muscle cells when people are affected by muscle atrophy. Next, they tested its effects on skeletal muscle and discovered that tomatidine stimulates growth of cultured muscle cells from humans. Then they added tomatidine to the diet of mice and found that healthy mice supplemented with tomatidine grew bigger muscles, became stronger and could exercise longer. And, most importantly, they found that tomatidine prevented and treated muscle atrophy.
Scientists are unsure how many green tomatoes a person would need to eat to get a dose of tomatidine similar to what they gave the mice, or if the same dosage would be healthy for humans. More research is needed to answer these questions and to discover if tomatidine can be incorporated into science-based supplements or everyday food to make them healthier.
Keep up with Texas Orthopedics news! Follow us on Facebookand Twitter (@TexasOrthopedic).