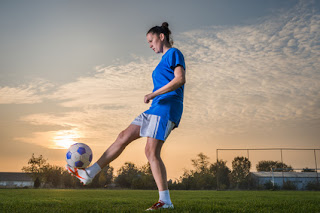 September marks the start of football season for a lot of eager folks in Central Texas. But for many, soccer is just as popular a fall sport as football, especially among women.
There are many elite women’s high school and club soccer teams around Austin, as well as at the University of Texas, where several players have gone on to play professionally and for national organizations.
Soccer injuries that we frequently see in our office at Texas Orthopedics include sprains and strains, fractures, and ACL tears. In fact, female soccer players have a three times greater risk of ACL injury compared to males.
A recent study shared by the American Orthopaedic Society for Sports Medicine (AOSSM) revealed that wearing a neuromuscular device can help reduce ACL injuries in female players.
A wearable neuromuscular (WNM) device transmits tiny electrical signals through the skin to the muscle and surrounding tissues to keep them flexible and primed for action.
Specifics of the study include:
These results should encourage coaches and teams to try out WNM devices for their athletes who are prone to leg/knee injuries or have suffered an ACL injury in the past.
(Courtesy of AOSSM)
Keep up with Texas Orthopedics news by following us on Facebook and Twitter (@TexasOrthopedic).