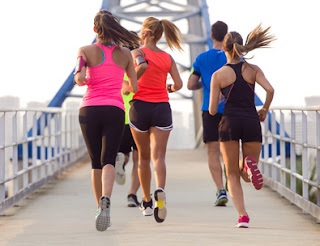 Track, treadmill, or trail, you name it…women will run it. Women runners are now outpacing men in everything from casual, charitable road races to more grueling half-marathons.
According to Running USA, women mad up 57% of the 17 million U.S. race finishers and 61% of half-marathoners.
Many writers who contribute to the running/racing beat credit this rise in female running to two key events.
The first one was Oprah Winfrey finishing the 1994 Marine Corps Marathon. She documented her training every step along the way and wore bib No. 40 to reflect her age. Thousands were inspired and cheered her on, and she claimed that if she could do it, any woman could.
Secondly, about this time, a new series of road races designed to raise money for breast cancer research, and specifically targeted at women runners, became popular in markets all across the country. It was called Race for the Cure. Race for the Cure, which now organizes more than 150 events globally each year with nearly 1 million participants, paved the way for countless other charitable running events that are hugely successful today.
In addition to the charitable component that attracts many women to running, other reasons women like to run include:
Another more recent factor is the introduction of fashionable running clothing and athletic gear designed specifically for women. Women like to feel pretty while also showing they are athletic and strong. For decades, women have had to make due with ill-fitting sportswear tailored for men, but simply dyed shades of pink.
By 2010, women passed male finishers in all races being run in the U.S. (Running USA). And there is no indication that they are slowing down now.
(Courtesy of The Wall Street Journal)
Keep up with Texas Orthopedics news by following us on Facebook and Twitter (@TexasOrthopedic).