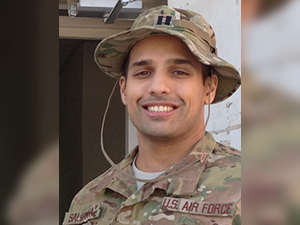 Dr. Vilas Saldanha is a firm believer in service, both for our country and for the medical well-being of Central Texans.

The board-certified, orthopedic trauma surgeon recently moved to Texas after serving as a Major in the United States Air Force. Following his military training, Dr. Saldanha volunteered for a deployment to Afghanistan as part of ‘Operation Enduring Freedom’, where he spent more than six months in a surgical squadron. During his overseas deployment, he performed more than 350 operations. He also founded the first orthopedic humanitarian clinic treating women and children displaced by the war at a partner clinic on Bagram Air Force Base, largest U.S. military base in Afghanistan.

“I volunteered because I felt like it was the purest form of medicine — doing something meaningful for our country and for the military,” explained Dr. Saldanha. “The injuries sustained in war are like nothing you’d ever see in the U.S. By managing these complicated, multi-extremity injuries, I gained confidence and the ability to take care of a wide variety of traumatic orthopedic injuries. If I could deploy every year, I would.”

After returning to the United States, Dr. Saldanha was assigned to the 99th Surgical Operations Squadron in Nellis Air Force Base, Nevada. He helped develop the Sustained Medical Airman Readiness Trained (SMART) program — a military-civilian partnership with Nevada’s only Level 1 trauma center. He served as an Orthopedic Traumatologist, where he trained active duty airmen in war trauma techniques to maintain clinical currency.

“The keen skills Dr. Saldanha honed during his military deployment will provide another layer of quality care for the orthopedic patients at Texas Orthopedics. We are thrilled to have him as part of our team,” said J. Brannan Smoot, M.D., orthopedic surgeon and president of Texas Orthopedics.

He has a special interest in limb salvage surgery, an alternative to amputation that often involves complex surgical techniques to save the injured limb.

Dr. Saldanha began seeing patients in our Round Rock and NW Austin locations in early January.

To make an appointment with Dr. Saldanha or any one of our board-certified orthopedic surgeons or sports injury doctors in Austin, please call us at (512) 439-1000 or visit us online.