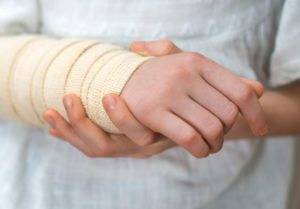 As we’ve just weathered a pretty gloomy winder here in Central Texas–with limited bursts of sunshine–new research reports that kids with vitamin D deficiency (often caused by a lack of sun) are at a greater risk for severe fractures.

This recent study shared by the AAOS is the first of its kind addressing low levels of vitamin D in children and rate of fractures, specifically to the forearm which accounts for 25 percent of all pediatric fractures in the U.S.

Vitamin D deficiency can affect calcium balance in the bones and cause lower bone mineral density and weakened bone strength. Later in life, diminished bone density can lead to debilitating conditions such as osteoporosis.

Parents of 100 children with low-energy fractures (like from falling off a bike or down the stairs), completed questionnaires about existing risk factors for vitamin D deficiency. Their fractures were then categorized as non-operative or operative.

Vitamin D levels were then compared between the two groups. Here’s what they found:

If your child has suffered a forearm fracture, it’s worth a conversation with us, or your regular pediatrician, to determine if low vitamin D was a factor. Vitamin D supplements can be helpful, along with a modified diet. The American Academy of Pediatrics recommends 600 IU daily of vitamin D for kids older than one year of age.

Some good old-fashioned playtime outdoors can go a long way too now that spring sunshine has arrived!

(Courtesy of the AAOS-American Academy of Orthopaedic Surgeons)