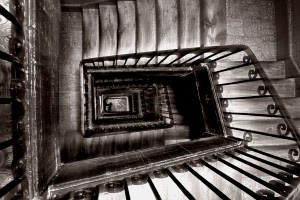 I noticed today was National Umbrella Day. No offense to the celebrated umbrella. I mean it does serve an important function: less so now, in the day of the garage, garage door opener and the covered parking garage. It was raining today. I didn’t get a drop on me, and I didn’t have an umbrella! But it reminded me of something which is just begging for a day of celebration: the lowly but dangerous staircase.

Now I’m not asking for a National Staircase Day. But if the umbrella can be celebrated, we could certainly celebrate the staircase, for how else could we have gotten from the first to any other floor if not for those ancient architectural marvels? Would we be schlepping up ramps or swinging from pulleys had not stairs been invented? So let’s do take a moment to give thanks for their creation.

But then let’s remind ourselves of all the damage they cause us, because we sustain countless numbers of deaths and injuries on them. Every six minutes a child falls down the stairs, resulting in an amazing 100,000 stair related injuries every year in children! Stairs are responsible for about a million injuries a year for all comers. I’m asking for a National Respect the Staircase Day.

That’s right. Let’s have a national day of attention to the dangers of the staircase. And let’s use it to remind us about prevention because every one of those injuries is totally preventable! And these aren’t just sprains and strains. I see hip fractures, wrist fractures, spine fractures and associated head injuries! I don’t see all the people who die. But they do! About 1,000 per year.

So here’s the simple scoop. When you get to the top of the stairs, stop, look … and grab. If it’s dark, then turn on a light! If you have stuff in your hands, transfer them to one hand so you can hold on to the banister. Most injuries on the stairs are related to not holding on to the banister. It’s just that simple! If you have too much to hold in one hand, then take two trips or leave some for the next trip down.

Interestingly, I rarely see anyone who falls all the way down the stairs. I think that’s because at the top of the stairs your subconscious goes, “OOOooo, scary. Be careful.” But about halfway down it becomes complacent. And it’s somewhere between the last half dozen stairs and the last one (which often is not there) where you take the plunge. Pay attention to EVERY SINGLE STEP until you reach the bottom.

STOP…LOOK…and GRAB! Let’s start now. And let’s make February 11 National Respect the Stair Day from now on. I like the 11th because in a marketing campaign the two ones could be made to look like a couple of stairs and a banister. To whom can I write about this?