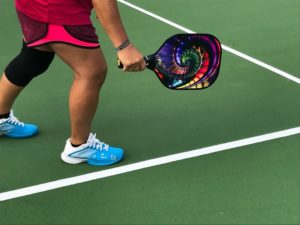 Pickleball is gaining popularity on the courts these days over tennis. It has a reported 2.8 million registered players across the United States, commonly known as “picklers.”

It’s a modern hybrid between tennis, ping pong, and badminton. The greatest group of followers of it are currently seniors, aged 65 years and over.

Besides the appeal of getting to socialize with friends while playing, pickleball offers a great cardiovascular workout while posing less risk for injury than traditional tennis — which can be tough on muscles and joints.

Many of our patients at Texas Orthopedics who were once devoted to tennis and have since tried pickleball say they love it. Here’s why:

This is not to say that pickleball lacks its challenges as a sport – it still requires a great amount of skill, hand-eye coordination, and communication with your partner (as the game is often played as doubles).

If you have a previously injured or weak ankle, knee, or elbow, make sure to wear a protective brace when “pickling,” as you would with any other sport. Also, always plan to do some light stretching and warm-ups before hitting the court.

To find a pickleball court near you, check out the U.S.A. Pickleball Association’s “Places 2 Play” court locator.

For injuries suffered while playing pickleball or any other racquet sport, contact one of our board-certified hand and wrist doctors or foot and ankle specialists in Austin, by visiting us online anytime.

Dr. Stockton Gets Patients Back on Their Feet with Innovative Ankle Surgery