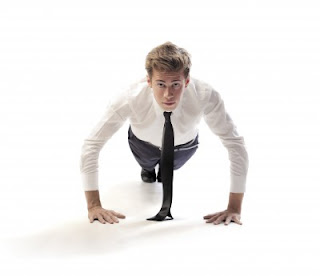 Show me the money! That’s what a new study says may motivate employees to consider exercising more as an incentive from their employer.
Workplace wellness programs have been around for a while now. This new study published in the journal Annals of Internal Medicinestates that more than 80% of large employers are currently using some sort of financial incentive to increase the physical activity of their employees. As research continues to prove that healthier, more active people tend to be sharper and more productive.
The study challenged 281 people to try and reach a 7,000 step-a-day goal over 13 consecutive weeks.  Three separate groups were evaluated with three different financial incentives/models:
Findings indicate that the possibility of losing the money led people to exercise more than the other incentives–resulting in a 50% increase in the amount of days participants met their physical activity goals.
The study suggests that a financial incentive to an employee exercise program can be very effective, but the way in which it is presented can also influence its success.
It also points out that many employee fitness programs tend to favor people who are already physically fit and likely to participate, but care should be taken to develop different strategies to engage those others who are more sedentary or may have trouble committing to a wellness program due to obesity or other underlying medical conditions.
Employers also should consider offering incentives at various levels tailored to different abilities, so that everyone can feel rewarded in some way. The general goal should be to get people moving, with the message that even small steps in the right direction can have a great and positive impact on your health.
(Adapted from CNN-Health)
Keep up with Texas Orthopedics news by following us on Facebook and Twitter (@TexasOrthopedic).