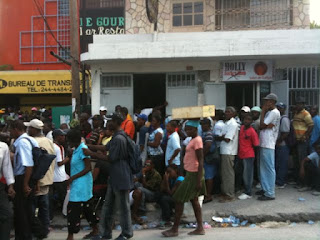 The following was provided by Ashley Hurt.

Today wasn’t that busy so the team did a lot of organizing , discharges, and recruitment for new patients. Joel went back into town to the general hospital to recruit. He met a guy that said he could helicopter 12 patients a day to them. They’ll have to see if this pans out. Will know by 0800 or 0830 tomorrow.

At the general hospital medical personnel write Dr. and their first name along with specialty on a piece of tape and wear it on your chest for identification. Different to go by Dr Joel he said.

Presbyterian hospital was supposed to send 10 patients to them today. The team didn’t receive them and no one could explain why these patients weren’t sent. Everything is very confusing over there. If pt volume doesn’t pick up all team members will come home on Thursday or Friday. We will know more tomorrow.

They had 50 or so beds donated to them today. So now they could really ramp up surgical volume since they have a way to house the post ops. Would need to secure and verify next teams coming to make sure someone is on the ground at all times to care for these patients.

There is a lot of medical personnel in the city. Another team from Watermark in Dallas arrived today at the MOH. RN’s, dermatologist, medics

“One thing you can count on is you can’t count on anything” There’s a lot of confusion and plans are always changing per Joel.

Joel wants me to reiterate how safe it is there. It is a very secure location.

Revision BKA (below the knee amputation)

They had an emergent C-section they sent to the ER. She became eclamptic and seized. Mother and baby did well.

1 death today. They operated on her yesterday. She had a traumatic AKA (above the knee amputation) right after the quake. They revised and closed the leg. She became very ill so they transferred her to the hospital. She was very anemic. In route she coded and died.

A driver for one of the teams is a survivor from the earthquake. He was on the ground floor of a building with 50 or 60 other people in his class when the quake hit. He was crushed under rubble, pinned down. He heard people screaming and dying slowly. He was able to reach his friends hand and hold her hand until she died. He could only breath shallow breaths under all the rubble. Another friend dug him out from the second story. His teacher took him back to the building along with the 12 other survivors who had gashes, wounds, amputations. He was the only one walking with barely a scratch. He said, “why me?”

Pic 1: Haitians that live in the tent city by the Nation Monument are lining up for food