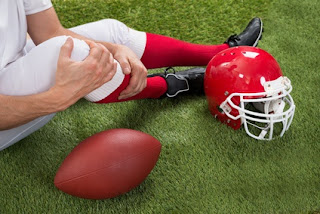 Dr. Scott Smith, orthopedic surgeon at Texas Orthopedics, explains the ins and out of this common sport injury.

What is the ACL? How Common is the Injury?
The ACL is a large ligament in the center of the knee that controls translation and rotation of the knee. Its function is essential for high performance activities that involve start-stop and cutting movements. For some, an injury to the ACL will affect an athlete’s performance, is a season ender, and may even be a career ender.

ACL tears are especially common in football players. There are approximately 12 injuries for every 100,000 player exposures. Another way to look at this is a team of 100 players practicing 5/week for 16 weeks can expect to have one tear per season. Girls’ soccer and basketball have very similar rates.

Cause and Diagnosis
Injuries occur most often with a deceleration and external rotation, non-contact mechanism. A change of direction or cut on a fixed foot can result in a tear. A direct blow to the knee causes 20% of ACL injuries.

After a knee injury, most players are evaluated by their trainers and physicians. Usually the diagnosis is made on the sidelines by exam and frequently confirmed via MRI within the next week or two.

Treatment: What to Expect
Most high school athletes undergo a surgical reconstruction of the ACL shortly after the injury but there is no urgency as to timing. The operation is called a reconstruction because it uses a graft from elsewhere in the body to reconstruct the torn ligament. It is not a repair. Graft choice is surgeon/patient preference and there are multiple options: patellar tendon, hamstring, allograft (cadaver) and others.

The procedure itself is complicated and requires expertise; however, most sports orthopedic surgeons perform numerous reconstructions per year and consider it routine. The surgery itself takes approximately 60-90 minutes. Surgery time can also depend if there are other injuries which require repair (meniscus, cartilage, and other ligaments). ACL reconstruction is an outpatient surgery and patients can usually return to school in 2-5 days. Pain medication and crutches for 2-4 weeks following surgery should be expected.

Data suggests that between 70-85% of athletes return to sport at the same level they were at pre-injury. Unfortunately there is a very high re-injury rate in high school athletes as well as an inordinate rate of tearing the other knee’s ACL.

Prevention better than reconstruction. There now are multiple programs all with variable success at preventing knee and specifically ACL tears. These typically involve quadriceps, jump and balance training. These programs should be a standard part of all sports training.

If you’re interested in a training program, talk to your coach or athletic trainer.