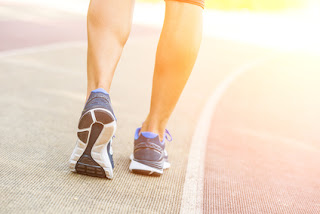 Great strides have been made in running shoe technology over the past 40 years. While some prefer a fancy shoe with a thick, cushiony sole, others opt for a “barefoot” version with minimal layers so the foot can actually feel and grip the path or pavement. But can either shoe help prevent some of the common injuries runners frequently face?
A recent study in the Journal of the American Academy of Orthopaedic Surgeons (JAAOS) examined running strides and landing patterns associated with different types of shoes and whether or not they caused heel pain, such as plantar fasciitis, and stress fractures. Here is what they found:
Results suggest that changing gait patterns, from RFS to FFS, may help runners prevent some injuries.
While the shoes themselves though are not credited with preventing injury, the less-cushioned minimalist footwear may encourage runners to naturally transition from RFS to FFS pattern. A change in gait pattern can also be achieved with traditional, thicker-soled running shoes through a conscious effort and repetitious training.
Transitioning gait pattern should be a gradual one over many months, adhering to the 10 percent rule when increasing running distances.
If you experience any pain or have issues when running, please contact us for an appointment.
(Courtesy of AAOS)
Keep up with Texas Orthopedics news by following us on Facebook and Twitter (@TexasOrthopedic).