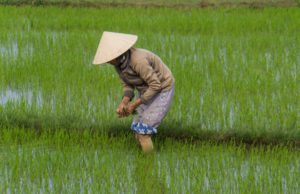 Could your native country indicate how much back pain you have?

According to a recent story on NPR (National Public Radio), the answer is yes.

Americans report more back pain than any other country in the world. Many experts say it can be attributed to the sedentary lifestyle that is typical in the U.S., involving long hours sitting at a desk, followed by even more hours sitting in front of a television or other electronic devices.

Another contributing factor could be how we bend over.

Anthropologists have noticed that Americans, and those in other Western cultures tend to bend at the stomach and curve the spine into a C-shape when going down to reach for something. This is an unnatural position that can put pressure on the spine and irritate its delicate disks or cause them to painfully slip out of place.

In comparing the way others bend from different cultures (including Liberia, Madagascar, Guatemala and India), scientists noticed that they all squat at the knees, and then bend their hips over keeping the back relatively straight, like a table.

This particular manner of bending is known as “hip hinging,” and is said to be gentler on the spine, as the upper legs (hamstrings) and hips then do most of the work.

Hip joints by nature are sturdy “ball and socket” joints that are designed for more wear and tear and exertion than the vertebrae in the back.

Think of how a weightlifter slowly lowers down on his knees to grab the barbell with his head up rather than bending over face down to grab it.

To protect your back when bending over, here are simple steps to practice proper hip hinging:

If you have regular back, or hip, pain and would like to discuss options for treatment, please contact us for an appointment with one of our specialists.