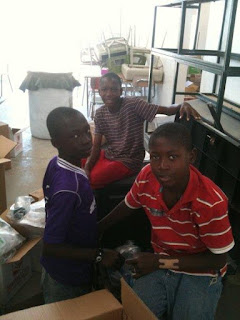 The team’s travel was long, picking up members along the way. Finally all 18 of us boarded the last plane headed for PAP. We took a quick stop into The Bahamas to refuel and came across tanned rested people, clearly not on their way back from Haiti.

The arrival was a bit hairy, actually dark is more accurate. Somehow the power was out at the private terminal we arrived and we were left with our luggage and some security guards. One phone call to Bob King and we were on our way to MOH. Mark found us and Ruben was our host for the night.

The streets were streaked with street vendors, colored homes and plenty of crowds visiting amongst each other. We watched colored trucks and vans weave in and out of traffic with people seated in the back, some were standing and hanging on for dear life. The very art decored vehicles are called “tap tap” (cuz you tap the top of the roof when you want to get off) which is a taxi to us.

Upon arrival to MOH, Vanessa Johnson greeted us and showed us to our quarters. She is “Mrs. President” of MOH. Soon after we settled to a much needed meal. Spaghetti and salad and french bread. It was great! Dr. Cheryl showed up shortly after and started debriefing the teams.

She gave us history on MOH, the day of the quake until present. I still am speechless at how everything happened and the devistation of this poor country. I helped Dr. Cheryl in the debrief getting questions answered for the team and then she kissed me on the cheek because I am here to solve her supply maddness. We walked down to the clinic and ward for a tour. I think we were all anxious to see were we will be working for the week. It was just short of midnight when we made the long treck uphill back to our quarters.

Elena and I opted to sleep in a tent outside, it was much cooler outside. We were awaken by a rumble in the ground. It was morning that we realized the a 4.7 hit us. We also had another little shift in the afternoon. Most of us were up at 600am and the consensus was we didn’t get much rest.

We started at the clinic taking a look at supplies. Patients and their families were starting to arrive to wait in line for treatment. Dr. Jennifer came out and greeted everyone with a prayer and hymn. It was just beautiful, again another speechless moment. A gentleman who was weak and staggering showed up. I couldn’t help but leave supplies to help him down and get him on a stretcher. Sometimes I am so torn with cleaning and wanting to be with the patients. They all have such a gentle demenour and greet each one of us as they walk by. The perfect patient.

Supply madness is an understatement, there are rooms upon rooms of stuff, for lack of a better term. Somehow after 10 hours of work we managed to clean, sort and organize one room. The surgical supplies, for me a important one. Dave a pastor from Indiana helped put some shelves together with Cevere, my assistant. He went up to the quarters for lunch and “brought” Elena and I some lunch. Really it was for our sweet little helpers, Samual, Schneider and Richardson, Blez and Linder. They worked very hard taking “pupel” (spelled wrong but is trash in creole) out for us. We took a quick break and enjoyed our time with them. Cevere is determined to make us Texans fluent in creole, we have him laughing at us all the time.

Aside from our day we heard constant walkie talkie conversations with STAT calls and request for Docs to the Ward or Clinic and it is with great saddness that I say we lost someone today in the ward. Vanessa said it well at dinner when she explained to her daughter that the lady in the ward went to be with Jesus. I am confident she is there.

Our night shift nurses told us when the 4.7 hit the ward up and evacuated themselves in a moments notice, for fear of the same devestation that now is 6 weeks out. Even Ruben showed up in a wrist brace because he fell running out of his home. No one feels safe hear, except of us Americans who have no idea what these people have been through.

Five cases in and almost 200 clinic patients the day has started to come to an end. There are 5 cases posted for tomorrow and 3 preops are in our ward now, ready for tomorrow. Some Orthos and many STSG for Plastics.

Dinner was served around 6pm with seasoned potatoes, corn, jello and chicken. Everyone is exchanging stories and discussing plans for tomorrow.

I think the most exciting for me was our C-arm finally arriving and working. A successful tibial retrograde nail ( glad Dr. Dirk agreed to do) and my one measly room done with a gift of new friends I did not expect to make.