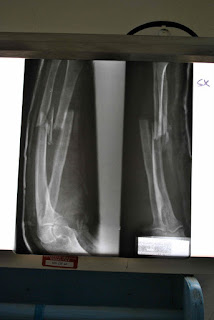 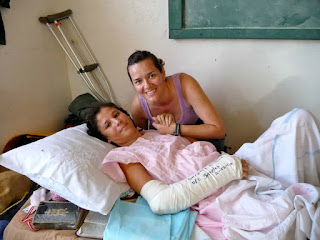 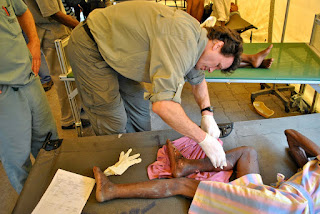 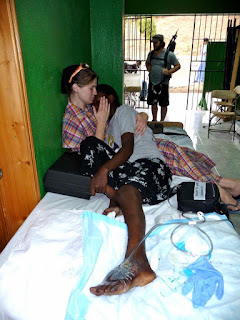 Update from Diana McKeon:
I wasn’t there to witness, but right before dinner last night we had a trauma- mom and baby were hit from behind by a vehicle while walking down the road. Baby was thrown and only suffered a leg fracture (diagnosed without xray and casted by feel) . Mom suffered severe degloving and fracture to left foot, ankle elbow and left scalp/ ear. Dr. Sandy, Dr. Brannon, Dr Cheryl and Dr. Lee worked on the patients in the clinic, then Dr. Lee helped transport the mom via ambulance to University of Miami Hospital in Port au Prince. What a last night!
Update from Josh Livingston, MD on Days 4-6:
Wednesday some of the team traveled to Port au Prince to visit General Hospital, among other places, in search of equipment and patients. By the time we arrived only one ortho patient was in the triage area – an 82 year old lady who had injured her foot in the earthquake and likely fractured bones. At the time, they dressed the wound and told her to come back later. Despite the family’s denial, she was demented and had ripped off the bandages at home. Her wound, which was grossly infected, had been swarmed with flies who had laid eggs. By the time we saw her at General, there were giant maggots eating the dead tissue of her wound and the smell was almost unbearable. She was in a triage tent and that stench filled it. There had been other ortho patients there that day, but they had been sent away to come back later.

We agreed to take the 82 year-old whenever transport could be arranged and told them that there would be an Orthopedic surgeon at Mission of Hope through the following week. Dr. Cheryl did her best to secure an anesthesia machine, but no dice. As we were leaving an English speaking Haitian asked me if I was a doctor and could look at a lady waiting outside the tent. She had a large scarf wrapped around her lower face. When she took it off, it was hard not to show my astonishment. She had a bowling ball sized mass growing off her jaw, predominantly to the left. She had been eating around this thing, which had been growing for at least five years. Another chronic medical issue that predated the earthquake. I got her information, took a picture (which I promised to share with only medical personnel), and took a picture of her x-ray, but nothing we could do about it.

We were hoping to make our way to University of Miami that day, but a late start and other errands on the trip made that impossible. We agreed that we didn’t care to be out in Port Au Prince after dark, despite having armed security.

We stopped by Pain Plus for dinner on the outskirts of PAP. Despite the funny name (pain is Creole for bread), they offered some Americana and everyone opted for pizza. Pizza was pretty good at this point.

Sadly, Thursday was a dud surgically. Our 82 year old did not arrive until the evening. The ambulance crew had to end up fetching her, which led to a very thorough cleaning of the ambulance. I went to work organizing the anesthesia area of the OR and then the second floor of the ward/school, which was to be the medical supply storage area. That ended up being a much harder job than being in the air conditioned OR. Apparently my little bit of type A personality came out, because along with some Haitian muscle, we got a lot done. Jared assisted, Kathleen helped in clinic and organized the OR, Dr. Brannon saw ortho patients in clinic, Diana had a very busy day of wound care, and Dr. Sandy & Dr. Lee busted booty in clinic (like they did every day).

Friday the OR got some work done, first doing a below knee amputation on the 82 year-old. Dr. Brannon and Jared had the foresight to clean her leg wounds thoroughly and blast out the maggots before bringing her to the OR. Despite our efforts the smell still endured. I had a difficult time getting a spinal thanks to her auto-fused spine and lack of cooperation with positioning. Was finally able to get an epidural and ran with it. The case proceeded well.

Next up we had two surgeries on one patient. Fritz had a both bone forearm fracture that was now a month old, and a pilon fracture (just above the ankle). My job looked was easier than that of the surgical team. Dr. Brannon had to basically put the bone ends together at a 90 degree angle and use brute orthopod strength to lever his arm straight. He did an excellent job, got everything as anatomical as humanly possible. Next was the ankle fracture, which is right up his alley. Made that look easy.

The ER docs had their hands full with typhoid out the wazoo, sick patients everywhere. Diana had a particularly busy day. Three of her patients that stood out in my mind. First was the kid in his late teens with nasty, chronic wounds on the medial aspects of both calves. He had sickle cell disease, and later found out he was super profoundly anemic. These sores were a result of these problems and would not heal. This is a very tough problem in the US, much less here. Second was a young, beautiful Haitian woman that had a below knee amputation. She had apparently been Haiti’s preeminent ballerina. Not sure what she’ll do now. Third was a girl from the Mennonite mission that had been our first operation on Sunday, Jean. She was doing great, but had been the patient we all bonded with the most. It was good to see her and see the Mennonite women loving on her. That is a very important part of the recovery for them.

Friday night we were treated to hot dogs and mac & cheese. It was good. Better than I would have thought a week ago. Saturday morning Sandy and Diana went down to the orphanage. Dr. Brannon and team went for the final rounds on our patients. Everyone was doing well. We started to get nostalgic, there was a lot of bonding in this short week. I was a total outsider to this group initially, and I am going to miss everyone. Hope to get a chance to get back together at some point.

Flights home were pretty uneventful. After a week in Haiti the little annoyances are nothing and the good things you used to take for granted are really good. I like to think that while I was doing some good for Haiti it did a lot of good for me. Lord knows a week away from my family was rough, the longest I’ve ever been away from them. But an awesome experience. God bless the people of Haiti and the missionaries who make it their life’s work to help them.