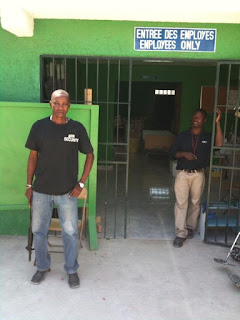 Dr. Sandy’s morning started with a bang. Right as clinic was starting, she was called to the ER room for a very sick 32 year old man. He presented with three weeks of fever, vomiting, diarrhea, altered mentation and ashen in color. He was in shock and probably sick with an extreme case of typhoid. Luckily, we had found oxygen tanks yesterday as his oxygen saturation was half of normal, 48%! His heartrate was twice the normal level at 152. With a team effort, they started two IVs that were open wide, started an antibiotic for presumed typhus, and placed him on the maximum oxygen level available. His heart rate did improve some and his oxygen level increased to 86%. With the assistance of Dr. Jennifer and Grant, MoH staff, they urgently transported the patient to general hospital. His tests later confirmed Typhoid Fever. We await word from General Hospital on his condition. Apparently, this is a common tropical illness in Haiti. It is unfortunate that the locals here don’t realize that the Mission of Hope is giving free medical care after this earthquake disaster. The Haitians don’t seek care sooner because they are afraid of the cost. This is such a great example of how supporting the Mission of Hope can provide aid to so many Haitians in so many ways. Food, tents, sleeping bags, medical care, dressings and supplies for people to take care of smaller wounds, infant formula. Not to mention what is provided through the orphanage and the school.The ministry through the church has tripled since the disaster. Before the earthquake, if service was scheduled for 9:30, the locals would show up around ten or ten thirty. Now, about fifteen hundred people start showing up around 6:30 am to go to service. The church is standing room only for every service. It is so wonderful that MoH can provide this. The Haitians are desperate to know that they are safe in the arms of God.

Picture 1 :Our entrance to the clinic. The guard on the left and Wilfred, one of the many interpreters, on the right. The bed in the background is where I see most of my patients.