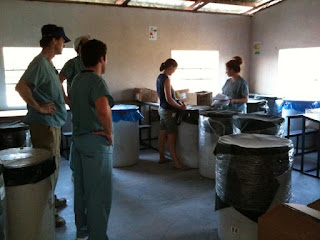 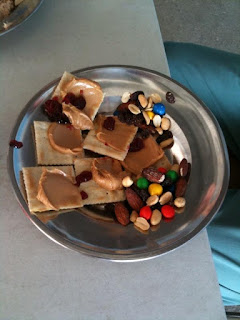 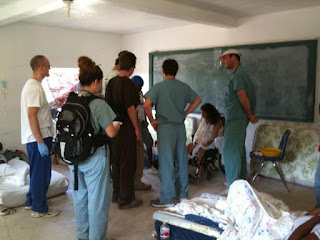 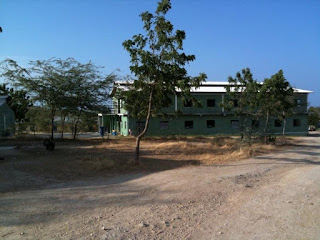 Late last night we found out that today was going to be another national holiday- carnival aka mardi gras. That meant clinic was closed, Haitian workers off duty, surgeries were still on for our ward patients and warehouses could be sorted. Dr. Brannon, Dr. Greg and Dr. Lee had gone down to talk with a young man about the need for a below knee amputation. His leg had been badly crushed in September and he had been getting around on crutches with with an open leg wound. He had had a procedure to try to heal his wound by a local orthopedist before, but it didn’t work. He didn’t want the amputation- he kept saying “I want to walk”. After being told by the orthopedic surgeon that he would not have a functioning leg and he had no bone left to attach the foot, he realized that the only way he could walk again would be with amputation and a prosthetic later. After surgery he woke up crying in anguish with the realization that this was the way it was to be. Later, on at the ward, with his mother at his side, he was calmed. Dr. Brannon told the family he had high hopes that the mission if hope would be able to arrange for a prosthetic limb. They were left with many questions, but we are hopeful that the mission will be able to support him and countless other like him.

Since clinic was closed today, we had the opportunity to search through the warehouse and the upstairs of the school where Mission Of Hope had stored supply shipments. The mission is part of a group called Haiti One. This is a group of missions that collaborate to provide haitains with emergency relief now and in the future. One of our big tasks was to sort through a large shipment of supplies and separate items into 3 different palates. Two missions came in the afternoon to pick up truckfuls of boxes. After that we headed to the second floor of the ward. The ward is actually the mission’s school. The first floor is our ward- our inpatients that need closer monitoring. The second floor had four rooms filled with shipments of supplies. We were tasked with organizing everything into rooms labelled surgery, er clinic, wound care, medicines, IVs, and “out”- things to be sent to other missions. Everyone worked relentlessly, getting filthy, dusty and hungry. We managed to get a good basic organization and found some needed supplies. I searched for more KCI VAC units in vain. We have four, but one is not working. I plan to bring it back to Texas for repair and hope to get it back to Haiti. Dinner looked ominous- a ginormous pot of spinach mixed with meat, beans, carrots and I think I saw a red pepper. But looks were deceiving, it was fabulous! A little rice mixed in and some animal crackers for dessert and we were happy campers! After dinner, we pow-wowed on the porch for about tomorrows game plan: off to the Menonite Mission for VAC and other dressing changes, then some of the TX team will be going to Haiti General Hospital and University of Miami (set up in tents at the airport) to see about more ortho surgery cases. I’m off to the showers. Thanks to Dr. Lee, we have much better shower flow.

Picture 1: This is in the second floor of the school. All these barrels are filled with supplies. Dr. Sandy has amazing organizing skills! We were some busy workers.