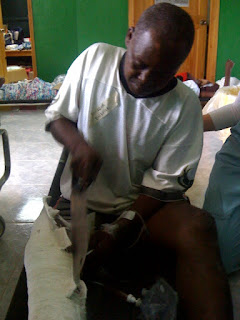 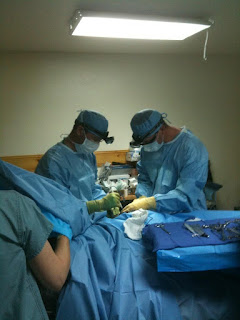 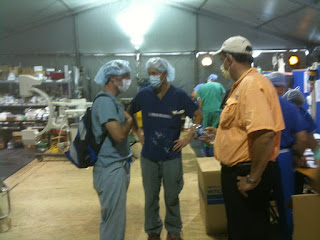 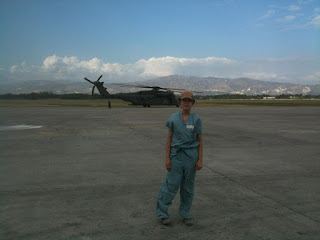 Update from Dr. Goldberg
-Dr. Crawford and Dr. Hatridge (anesthesia) spent the day in surgery (2 femur fractures where he used retrograde nails and an ex fix on an open tib-fib fracture) while he started the morning helping Dr. Mehta (ER) and Dr. Smith (IM) seeing over 200 patients who had arrived to be seen at the MOH clinic. These patients come in at 7:30 because they want to be first in line because they know that only a certain number can get through the gate, and they waited all day long, no food or water, upwards until 5:30 until we got the last prescriptions out, no complaints to doctors or staff.
-Dr. Goldberg met with the chief medical officer and chief supply officer at the University of Miami tent to talk about trading patients, supplies, etc. It is a huge facility with multiple tents and 200-250 patients per tent. They do have an operating room there but nothing is sterile so they can only do external fixators and washing out debridements. They have only have a portable xray machine without an ability to print. Dr. Goldberg was able to take an xray of one of his patients from MOH and took a picture of the monitor so that he could reference it later.
-He then went over to the head of US Air Force operations to meet with the Medivac unit. Upon being stopped multiple times by military personnel, he argued and continued until he found the man in charge of getting the helicopters to the people that needed to be moved. He was promised that 3 helicopters would be at MOH this morning to move 9 patients to Hospital Sacre Coeur in North Haiti.
-The team lost a patient with an acute abdomen injury brought in by helicopter. He was obviously bleeding into his abdomen. and there was nothing they could do.

-The five physicians and Dr. Cheryl, who is the chief medical officer at MOH, took a car into town and went and had dinner with one of the local orthopedic surgeons. They met with a gentleman named Sandy Marger who is from Austin but he was raised in Haiti. He is coming back to try and help rebuild the country with some friends and had just concluded a meeting with the President of Haiti before meeting our team. The orthopedic surgeon shared with us that he worked for 72 hours straight after the earthquake. His family had no idea if he was dead or alive.

-The six nurses and 2 surgical technicians are organized and doing shift work. Each one of them is assigned nicely. We are served good food. We sleep in tents. Some of us sleep on cots in a little house. The work is hard. It is cool here at night. This is an absolutely amazing place.

Pictures:
Picture #1: MOH translator cutting a cast off of a patient. They need the cast saw that couldn’t fit on the last plane!
Picture #2: Dr. Crawford and Dr. Goldberg operating with headlights.

Picture #3: Dr. Goldberg meeting with the Chief at the University of Miami tent.

Picture #4: Sharon Depmore, LVN with Texas Orthopedics in front of a Medivac helicopter.