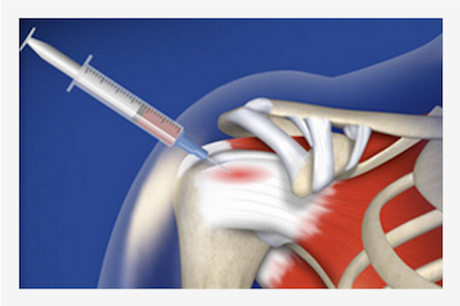 What do Tiger Woods, tennis star, Rafael Nadal, and L.A. Dodgers pitcher, Takashi Saito have in common? Besides being super stars in their respective sports, they’ve all received a treatment known as Platelet Rich Plasma (PRP) injections, for various problems such as sprained knees and chronic tendon injuries. Some athletes credit PRP with being able to return back to competition more quickly than other, more invasive treatments, like surgery. But do you have to be an elite athlete to get PRP? Fortunately, the answer is no.

Although blood is mainly a liquid, called plasma, it’s also comprised of small solid components, including red cells, white cells, and platelets. The platelets are best known for their importance in clotting blood, but they also contain hundreds of proteins called growth factors, which can be extremely helpful in healing certain injuries, especially in areas where there is poor circulation like tendon-bone junctions.

To develop a PRP preparation, blood must first be drawn from a patient. The platelets are separated from other blood cells and their concentration is increased during a process called centrifugation.

Studies have shown that the increased concentration of growth factors in PRP can potentially speed up the healing process. Currently, there is not enough research to definitely show superior effectiveness of PRP and most insurance plans will not cover this treatment option.

Conditions We Treat with PRP

Chronic Tendon and Muscle Injuries: According to research studies, PRP is most effective in the treatment of chronic tendon injuries. This would include injuries such as tennis elbow, Achilles tendonitis, partial hamstring tears, or inflammation of the patellar tendon at the knee (jumper’s knee).

Acute Ligament and Muscle Injuries: PRP has received a lot of publicity around treatment of acute sports injuries, such as ligament and muscle injuries. This is another area that is being studied.

Surgery: More recently, PRP has been used during certain types of surgery to help tissues heal. It is mainly used in surgeries to repair torn tendons and other soft tissue injuries.

Degenerative Arthritis: Some initial research is being done to evaluate the effectiveness of PRP in the treatment of the arthritic joint such as the knee and hip. There are major studies being done at institutions to look at the use of PRP and stem cell therapy in these conditions.

Fractures: PRP has been used in a very limited way to speed the healing of broken bones. So far, it has shown no significant benefit.